Downtown Sarasota’s New Year’s tradition is to drop a giant pineapple at the stroke of midnight. Huh? Pineapples? Sarasota doesn’t have pineapples, does it? 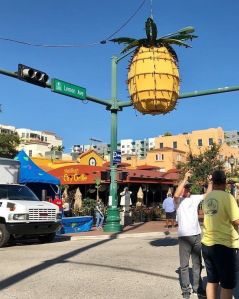 Yes, pineapples were once grown as a cash crop in Sarasota. William Whitaker, who homesteaded here in 1843, teamed up in the 1870’s or 1880’s with Charles Abbe, the postmaster of Sara Sota, as we see in this newspaper clipping: 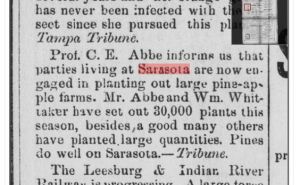 Bet you thought pineapples were native to Hawaii. Easy mistake to make. Here’s what Diana Harris, Englewood historian, wrote about that:

Hawaii is so closely associated with pineapples that one might presume pineapples were indigenous to Hawaii, that they traveled from there to the West Indies and Florida.

Actually, the opposite is true. Surprisingly enough, it is recorded that pups, slips and suckers from pineapple plants were shipped from Florida to Hawaii in 1885, thus starting pineapple growing in Hawaii. In 1901, Jim Dole started what is now a world-famous operation, Dole Pineapple.” Read the whole article including why pineapples are no longer grown locally except in our gardens as a novelty. 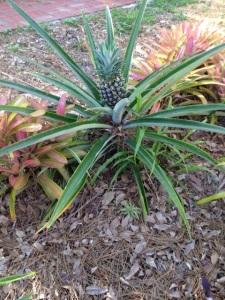 And of course there’s Pineapple Avenue. But then again, there’s Orange and Lemon and Cocoanut and even Osprey Avenue, and you don’t see a giant bird being dropped on New Year’s Eve, do you?

Since 2000, downtown Sarasota has welcomed in the New Year with a free special event … known for dropping a bright, decorative pineapple at midnight—much like how New York City drops an apple.

There’s just one mystery—why is a pineapple used?

About 10 years ago, a development was planned for downtown called Pineapple Square. Part of the development was retail stores along Lemon Avenue and Main Street. This includes the current stores there such as Blue Mercury, Eileen Fischer, and Sur La Table.

“As part of the marketing for the development, attractive pineapple-shaped light fixtures were installed along the exterior of the stores,” says Jan Thornburg, senior communications manager for the City of Sarasota.

And yup, developers were and are a much more lucrative cash crop in Sarasota County. 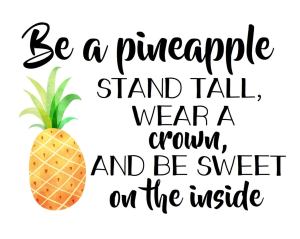 And now that we’ve whetted your appetite, how about a light modern Pineapple Upside Down Cake? 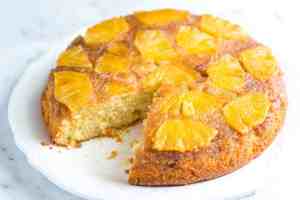 6 thoughts on “Pineapples in Sarasota: A History”