Sarasota split off from Manatee, after residents in South County grew disgruntled by terrible road conditions and the way tax dollars were being spent.

That’s what the June 16, 1921, headline of the rechristened The Sarasota County Times trumpeted, announcing the momentous news of the formation of Florida’s newest county. 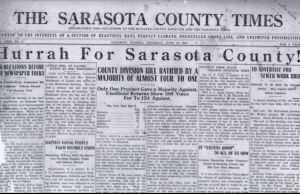 The Sarasota County Times: first edtion under its new name

For some time, the small communities which made up the southern portion of Manatee County — Sarasota, Osprey, Venice, Englewood, Miakka and Manasota — had been disgruntled by the terrible condition of their roads, and the manner in which their tax dollars were being spent.

A great deal of money went north to the Manatee County coffers, not so much was distributed back in the form of public improvements.

Dr. Joseph Halton kicked off the movement with a rousing speech. He saw the separation from Manatee as “obligatory.” Espousing the selfishness of “other sections,” he railed: “We want what is coming to us because we have had things taken from us that justly belong to us. We want our community to grow; we want to grow with it. We want to move and not stagnate.”

In 1920, a committee was formed to study the issue and propose how a separation could be effected. 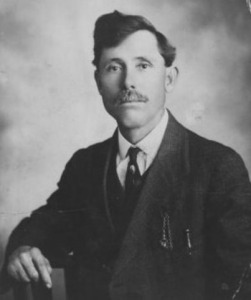 At a town meeting, Sarasota’s first mayor, A.B. Edwards, on the committee to collect data reported, “the territory comprising the proposed new county is paying considerably more into the county treasury in the way of taxes than it is receiving. The area which comprises one-half of the present county is represented by one commissioner, while the other half is represented by four.”

Edwards noted that of the $300,000 for schools, nearly one-third of which came from the south section of Manatee County, only $35,000 was received back.

The meeting was called “one of the most interesting and well attended mass meetings ever held in Sarasota.”

Developer Owen Burns, the largest land owner in the city, who also studied the tax situation reported, “We’re being taxed to death and we’re getting practically nothing in return … We’re being treated like a step child. The people in the Manatee River region have had their own way long enough—the time has come for us to become independent and chart our own course.”

Those against the separation argued that communities in the south portion would lose advertising in a split from Manatee.

But committee chairman and city attorney John F. Burket countered that Sarasota “was much better advertised throughout the country than Manatee.”

Several women were in attendance and Sarasota Times publisher Rose Wilson, a progressive who had editorialized for the right of women to vote, reminded the ladies “they would have the privilege and duty of expressing themselves on such questions (regarding the formation of Sarasota County) by their ballot.”

The meeting concluded with businessman Frank Walpole calling for “more pep and enthusiasm.”

Bradentown folk were none too pleased by the talk of separation, sour grapes, according to The Sarasota Times, “so evidently inspired by self-interest…that it is not expected to have much weight with the legislators…” Wilson noted the legal maxim: “When you have facts on your side, talk about facts; when you don’t have facts on your side, talk about anything in the world but facts.”

A letter writer to the Times quoted from the Merchant of Venice: “His reasons are two grains of wheat hid in two bushels of chaff; you shall seek all day ere you find them; and when you have them, they are not worth the search.”

After several more town meetings to garner support, a resolution was put before the Florida Legislature at its 18th regular session entitled, “An Act Providing for the Creation of Sarasota County in the State of Florida, and for the Organization and Government Thereof.”

On May 11, 1921, after the resolution passed unanimously, Burket sent a telegram to Rose Wilson at The Sarasota Times: “SARASOTA COUNTY WINS. BILL JUST PASSED HOUSE BY UNANIMOUS VOTE.” Three days later, Walpole, who garnered the pen the governor had used to sign the legislation, followed up with another telegram: “SARASOTA COUNTY BILL SIGNED BY GOVERNOR (Cary Augustus Hardee) AT ONE O’CLOCK IN PRESENCE OF SENATOR COOPER AND MYSELF.”

The next step in the process was a vote in the six precincts scheduled for Wednesday, June 15, 1921, with Wilson reminding that the women had a short time to register and pay their poll tax in order to cast their ballot.

The excitement was pervasive.

The Sarasota Times assuaged misgivings some may have had, noting that there would not be an increase in taxes, but, rather, that taxes created in the new county would remain in the new county.

The Times reported the passage would signal a new era in Sarasota development and the new county would have more money for schools and roads.

Another selling point: the new county would be represented by five county commissioners from five districts, and, as a consequence, “the roads and bridges of the entire new county will be better cared for than ever before.

The special election was the talk of the area.

Sarasota was ready to throw off the shackles of Manatee and chart its own course; its destiny a vote away.

The Venice vote was a surprise and, interestingly, after the bill passed, Venice leaders lobbied to have the county seat put there instead of Sarasota.

Rose Wilson wasted no time reflecting the area’s new status. The next day she proudly rechristened her paper The Sarasota County Times and the banner headline proclaimed: “Hurrah For Sarasota County!”

Sarasota County was on its way.