Do you have a bit of history in your back yard? 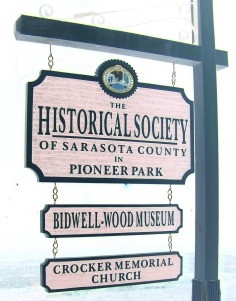 Oops... this is NOT the Historical Society's historic marker.

The Sarasota County Historical Commission is a group of civic-minded Sarasotans who suggest historical markers around our county. These markers contain some fascinating information… so next time you see one, stop and linger!

SarasotaHistoryAlive has catalogued the text of our historic markers on their fascinating site. This text is from there. Many thanks! You can also see photos of markers on Wikimedia Commons.

How about YOU? Which historic marker is close to your home?

Find it at SarasotaHistoryAlive, and add it below, in the comments.

Here’s the marker in my neighborhood. Even though I have been an historic interpreter of Bertha Honore Palmer (Mrs. Potter Palmer) for almost ten years, this marker had some information for me to add to my treasure trove of tidbits that I present as Bertha.

The Bee Ridge Community area, bounded roughly by Clark and Bee Ridge roads, and Cow Pen Slough and Phillippi Creek, was a high inland area of sandy ridges separated by marshes. It was renowned for many bee swarms. Isaac Alderman Redd first settled the area following Florida’s Seminole Wars and his discharge from the Army. Redd traded cattleman’s skills with other pioneers such as William H. Whitaker. After Confederate service, Redd lived with his family at several sites before settling forty-one acres on Bliss Road in 1877.

From 1877 to 1891 Isaac Alderman Redd was pastor of the Friendship Baptist Church chartered by ten area families. The growing Bee Ridge community included Redd’s oldest daughter Laura FeDonia, who with her first husband S.C. Rawls first settled in an area now know as Albritton Groves. In 1896, Donie and her second husband William H. Tatum built a home that stands on Proctor Road near today’s Lakeview School. The first school in Bee Ridge met in Henry Hawkins’s barn on Hawkins Road. In 1890 the Florida Mortgage and Investment Company, developers of the town of Sarasota, deeded an acre of land on MacKintosh Road for a school briefly shared by the Bee Ridge Missionary Baptist Church.

Mrs. Potter Palmer’s firm, the Sarasota-Venice Company platted the town of Bee Ridge. An official post office was granted in 1912. Mrs. Palmer’s Bee Ridge Hotel opened in 1914 and by 1917 the town boasted a dairy at Proctor and Sawyer roads, a Seaboard Air Line rail station and an apartment house, barber shop, and store on Harris Street. Lumber from the booming town was supplied by Mrs. Palmer’s sawmill, which was located on Gypsy Street and later housed a commercial cannery. In 1915 and 1917 the Bee Ridge Baptist Church and the Bee Ridge Presbyterian Church were added to the community.

Find your neighborhood’s marker at SarasotaHistoryAlive, and add it below, in the comments.

One thought on “Which Historic Marker do you live near?”